Why in the world am I doing this?!

Organising this fundraiser for Cambodia, and trying to figure out what we are going to eat has made me really reminisce about our time there and reminds me of the reasons why I am doing this.

During our work there, we would visit the country-side and find families who could not afford much food. They would scrape together enough money to buy some rice, and they would only accompany this with salt in order to give it a little more flavour and ward off the hunger. We visited one particular family that was trying to grow its own rice, but wasn't managing to grow enough to live on completely, so they had to buy additional rice. They would also forage in their rice field to collect snails which they would boil and add to their rice. Families would worry that their lack of proper food was hindering their children's ability to grow and fully function, but they could not do anything about this as they had no means of earning an income.

The organisation we worked for, Yodifee, would often explain that some disabilities developed because of the families' lack of access to food security and health care facilities. And like the chicken-and-egg conundrum, people who have disabilities are at increased risk of never having full food security.

Food in Cambodia always centres on the staple food - which is rice. In fact, we would be called to our meals by the grandmother of the house saying "Nyam Bai", and literally translated it means "Eat Rice".

When we lived in Cambodia, nearly every meal would include rice. By the time we finished our stint there, I could not bear to even look at rice, let alone eat it. We would have our own portions of rice in front of us and there would then be a communal plate of something small that would complement the rice, such as a fish or some beef or a soup. We would take from the communal plate and add it to our own portions of rice. Needless to say, rice cookers are the most important part of a Cambodian kitchen.

Here is a photo of our Cambodian friends eating when we visited the country-side with them. Each person has their own plate of rice, taking from the communal bowls which are the silver ones. 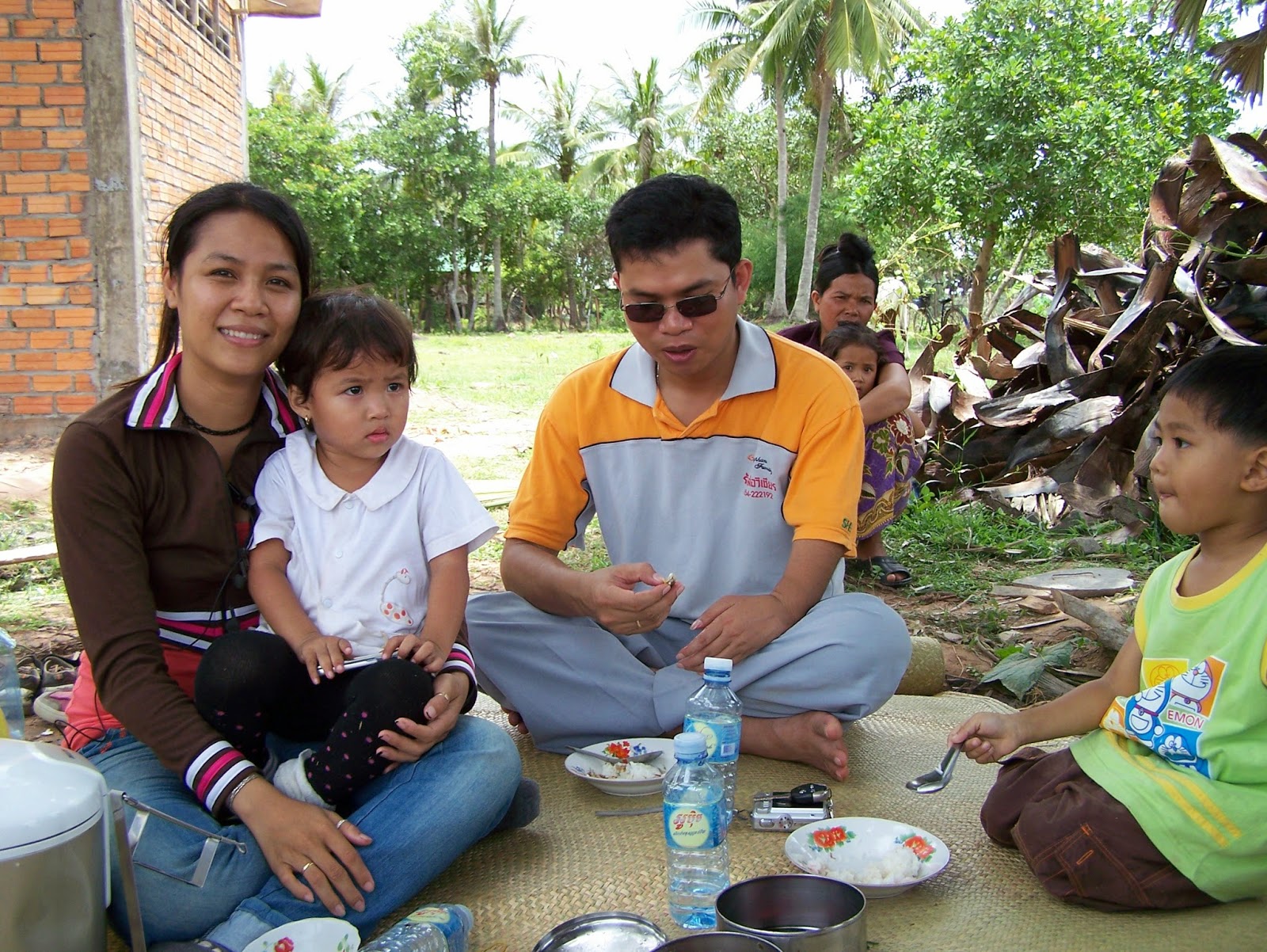 We also tried many other delicacies too. One of my favourites was literally translated as 'Cow climbs up the mountain', and it was made on a funny cone shaped frying pan (imagine a frying pan mountain) over a gas burner. We would have fresh pieces of beef which we dunked in egg and then stuck to the sides of this cone for it to cook. We would then add the beef to our plates of rice. While travelling in the countryside we also feasted on frogs speared through two bamboo sticks and we had a huge bag of crabs while we rested in the sea-side town of Kep.

I developed a tummy infection while there, and our Cambodian friends suggested that they take me to the Cambodian equivalent of a western fast-food restaurant to have burgers and fries, as they attributed my tummy troubles to the fact that I had not eaten 'western' food for so long! I managed to grin and try to eat something, but all I wanted at the time was bed rest in a dark room!

My time in Cambodia had a huge influence on my life. I was exposed to realities I had never imagined and realise that my own fortunes could have been very different had I simply been born in a different place. This is what is spurring my participation in this challenge. Unlike those we met, I will only be doing this for five days, but I hope that doing so raises some awareness to how so many other people in the world live - and raises some much needed funds for the medical centre.